40
SHARES
FacebookTwitter
Subscribe
I’ve been fascinated with conspiracy theories for a long time. In 2013, I gave a talk at WordCamp Baltimore on Alex Jones. The talk was called Weapons of Mass Influence: Content, Persuasion and Conspiracy. It focused on the psychological gimmicks Jones uses to sell products and persuade listeners to believe and share the theories he talks about on his radio show and website (Info Wars). The tactics are clever but they’re not original. Marketers have used these techniques for years.

There’s been a spike in discussion recently about fake news. Much of this discussion has centered on content shared from sites like InfoWars(dot)com. While preparing the 2013 talk, I listened to dozens of hours of The Alex Jones Show. Last week, after years without much Alex Jones in my life, I tuned in to see how Jones was reacting to the 2016 election results and the media coverage of President-elect Donald Trump.

What I found was similar to the research I did to prepare for the talk. Even though some of the tactics had been updated, the core principles used are the same.

To understand the tactics and the core principles being used, here’s a bit of background.

Some Background on Alex Jones

If you’re not familiar with Alex Jones, you can Google him. I’m not going to link to any of his content for reasons that may become obvious later. Instead, I’d recommend listening to a clip from the Joe Rogan Experience Podcast with guest Jon Ronson. Jon Ronson is a journalist and author of books like The Men Who Stare At Goats. Ronson describes the time that he and Alex Jones snuck into Bohemian Grove.

The quick summary is that Alex Jones is a conspiracy theorist and alternative media personality who believes the U.S. government is run by a shadowy group Satan worshipping Globalists. 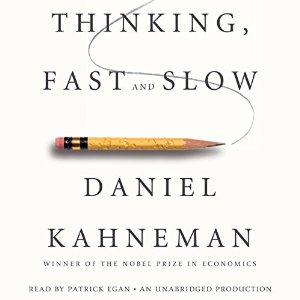 In 2011, Nobel Prize-winning economist Daniel Kahneman wrote Thinking, Fast and Slow. The book was a summary of decades of research on human behavior and suggests that humans place too much confidence in human judgment. Kahneman suggested that humans use two systems of thought.

System 1 Thinking relies on heuristics, or mental shortcuts, to make decisions. Most of the time, this is fine. These heuristics keep us from needing to expend energy thinking more critically.

But in some instances, these shortcuts lead to problems. These problems are called cognitive biases. There are loads of them but you may have heard of some of the biases like confirmation bias, the framing effect, anchoring, or the sunk cost fallacy. Here’s a graphic explaining 20 of them.

Marketers understand that certain tactics or language can trigger a System 1 shortcut and bypass our System 2 thinking altogether.

Here are some of the ways marketers trigger an automatic response from System 1.

The 6 Principles of Persuasion 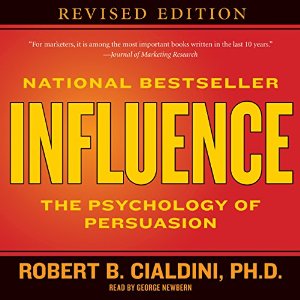 Influence: The Psychology of Persuasion by Robert Cialdini Ph. D.

In 1984, Dr. Robert Cialdini wrote Influence: The Psychology of Persuasion. It’s been revised since it was originally published but the six principles of persuasion are the same. The book examines triggers that marketers use to elicit an automatic response when making requests.

Here are the six principles with examples of how Alex Jones makes use of the principles on his show.

We are programmed to NEED to repay favors, debts and good deeds done to us if we are prompted correctly. 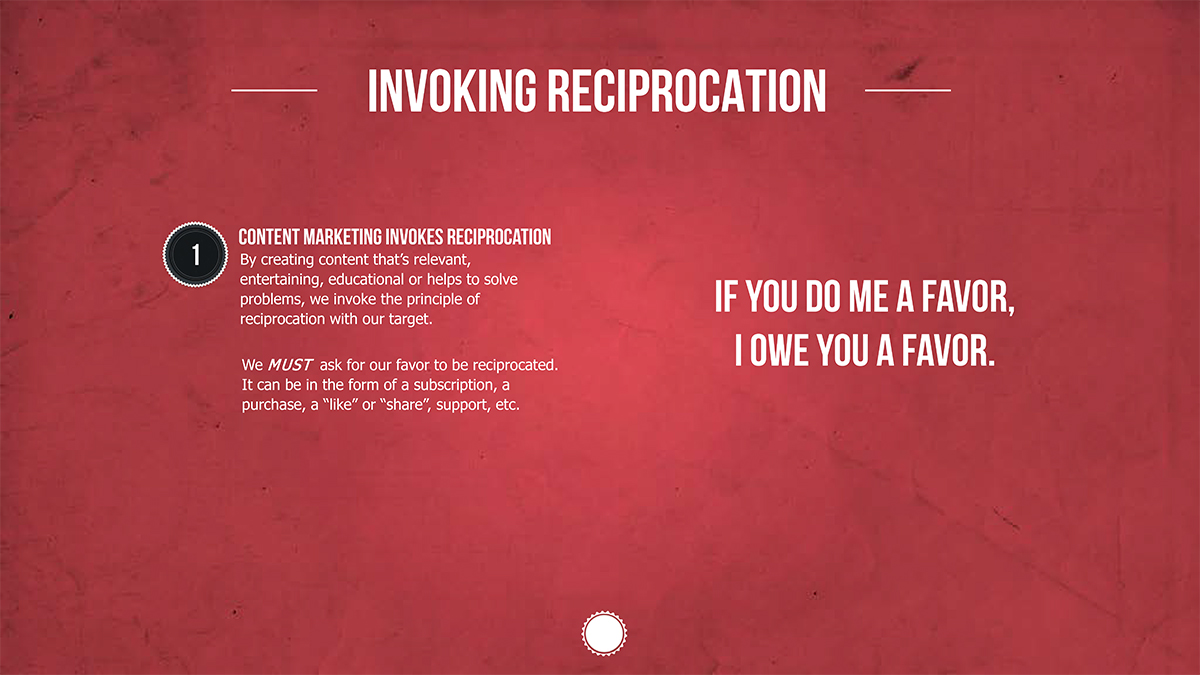 When there is less of a thing, we are more inclined to want that thing and want more of it. 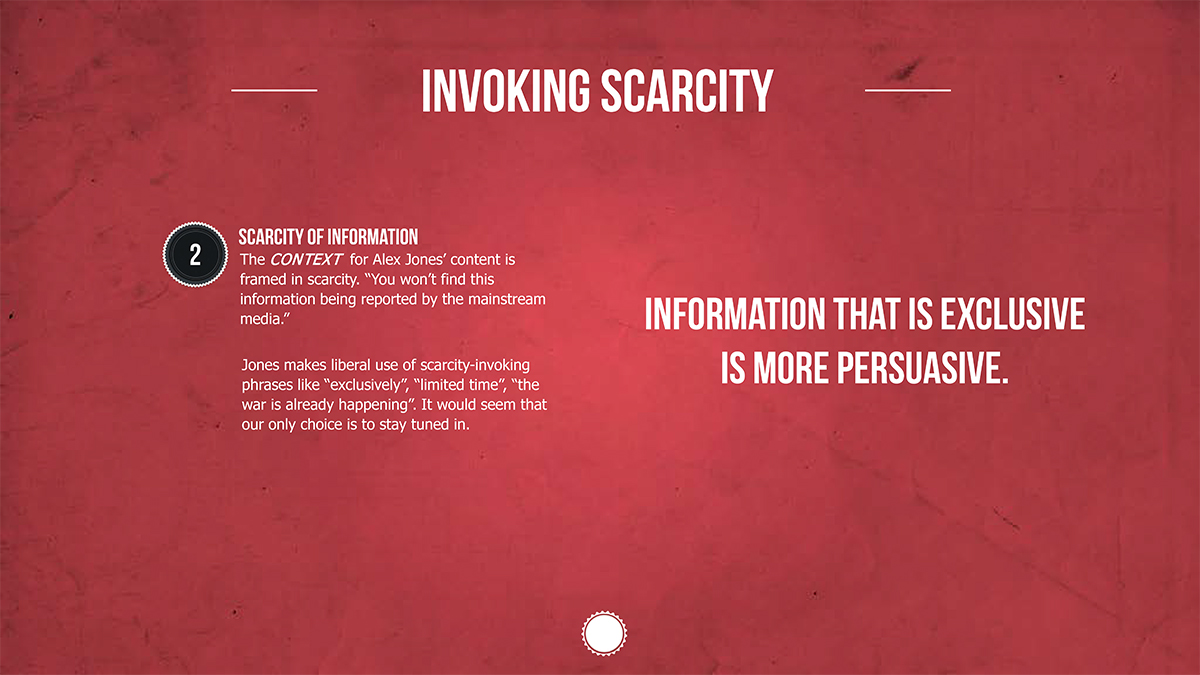 We are more likely to say “Yes” to a request that is consistent with something we have already said or done.

We determine what we should do in a given situation by what the crowd – or more importantly – by what our friends do. 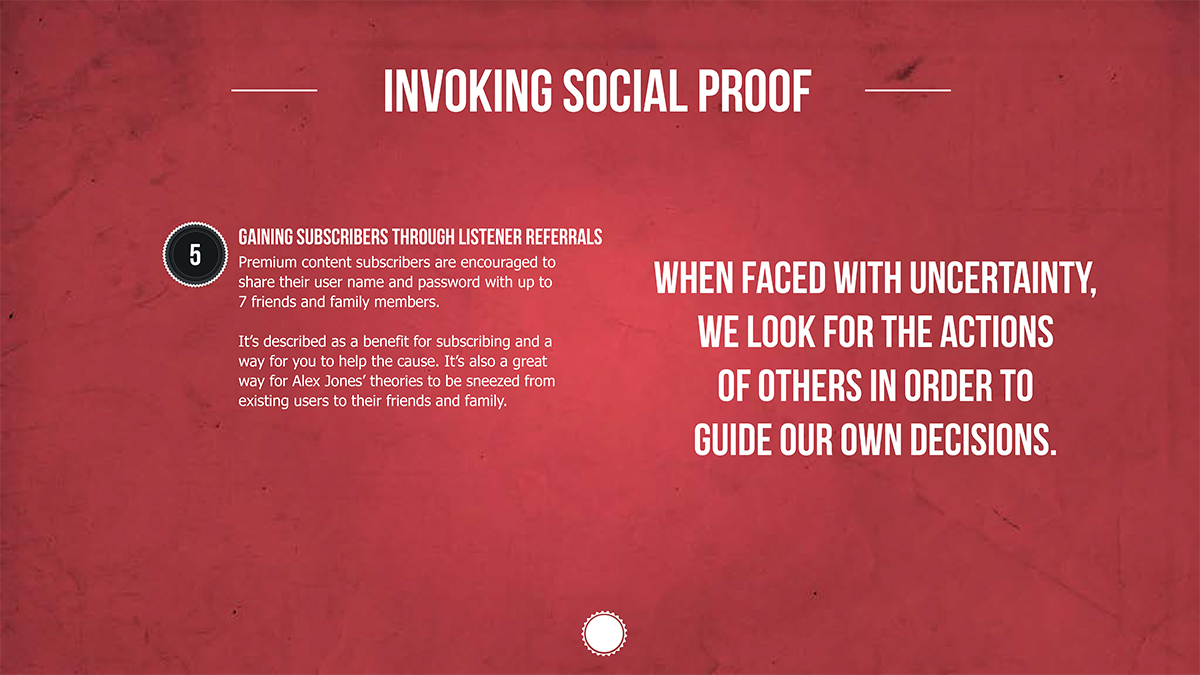 If an expert says it, it must be true. We have a regrettable tendency for expert worship in the U.S.

We prefer to say “Yes” to people we know or like. Similarities, compliments and cooperative efforts create increased liking. 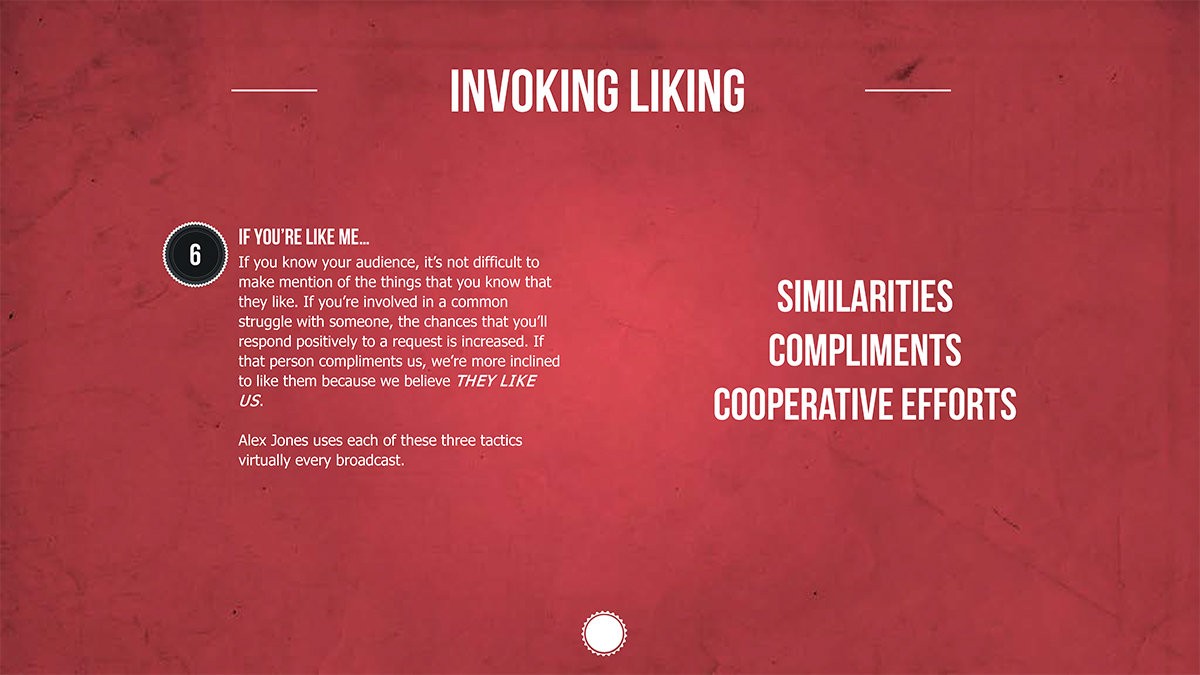 You can find the slides from my 2013 WordCamp presentation here.

What To Do When Someone Uses These Principles On You

If we’re aware that someone is trying to influence us using one of these principles, they become less effective. I would imagine that merely being aware of these tactics and recognizing them in the real world is enough to trigger our system 2 thinking.

Be on the lookout for marketing messages and sales people that do the following:

I’m not interested in telling you what sort of news sources to trust. And in fairness to Alex Jones, the mainstream media uses many of these same marketing tactics and techniques. But if you’re going to listen to Alex Jones or you know someone who does, be aware of the principles of persuasion before you go stocking up on water filtration systems or his brain supplements. His shows are as heavy on ads and sponsored content as anything you’ll find online. When you hear any of the triggers mentioned above, make sure to take note and engage that System 2 portion of your brain. 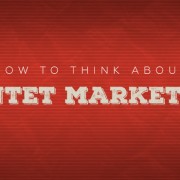 Facebook Ads: How To Target People Who Have Engaged With Your Page
Scroll to top